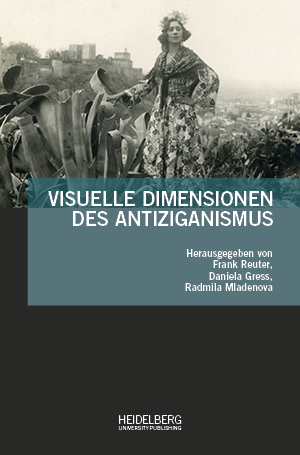 Visual media have played a key role in the genesis of antigypsyism since the early modern period. This interdisciplinary anthology examines the central motifs and semantics of "Gypsy" images in various forms of representation such as literature, visual art, photography, postcards, opera, theatre, comics, film and computer games. Particular attention is paid to connecting lines and interrelationships. The contributions uncover the content-related, temporal, geographical and media-specific manifestations of one of the most powerful stereotypes in European cultural history. To this day, antigypsyist imaginations have a negative impact on the positioning of Sinti and Roma in European societies.

Dr. Frank Reuter, scientific director of the Research Centre on Antigypsyism at the University of Heidelberg; from 2019 to 2021, he served as a member of the Independent Commission on Antigypsyism established by the Federal Government of Germany. From 1993 to 2017, he worked as a historian at the Documentation and Cultural Center of German Sinti and Roma in Heidelberg.

Daniela Gress, M.A. is a historian and research assistant at the Research Centre on Antigypsyism at the University of Heidelberg. From 2013 to 2017, as a stipend holder of Manfred Lautenschläger Foundation, she worked at the Centre for Minority History and Civil Rights in Europe at the Department for Contemporary History at the University of Heidelberg.

Radmila Mladenova, M.A. is a literature and film scholar working as a research assistant at the Research Centre on Antigypsyism at the University of Heidelberg. She has also worked for several non-governmental organizations in Bulgaria where she is active as a journalist, novelist and translator.