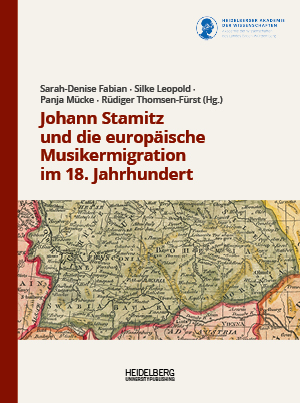 This publication documents the papers presented at the symposium "The Stamitz family and European musician migration in the 18th century", which took place in Schwetzingen on 17 and 18 June 2017 on the occasion of the 300th birthday of Johann Stamitz. The conference was organised by the Research Centre for the History of Southwest German Court Music of the Heidelberg Academy of Sciences and the Mannheim State University of Music and Performing Arts.

Johann Stamitz, a figurehead of Mannheim's court music, and his family are exemplary for the musician migration of the eighteenth century in Central Europe. Based on this, the papers will examine various aspects of the topic. It was part of the conference's concept to offer not only experienced experts in this field but also young scholars a platform for their own research and for the presentation of the results.

Sarah-Denise Fabian studied musicology, German literature and philosophy in Heidelberg and Cremona. She received her doctorate in 2014 with a thesis on wit and humour in the overture suites of Georg Philipp Telemann. Since 2015 she has been working as a research assistant at the Research Centre for the History of Southwest German Court Music in the eighteenth century at the Heidelberg Academy of Sciences.

Silke Leopold studied musicology, theatre studies, Romance languages and literature in Hamburg and Rome (1975 doctorate). She was a scholarship holder at the Music Department of the German Historical Institute in Rome (1975–1978) and a scholarship holder of the German Research Foundation (197–1980). She taught as assistant to Carl Dahlhaus at the TU Berlin and as a visiting lecturer at Harvard University; in 1987 she habilitated at the TU Berlin. She was Full Professor of Musicology at the University of Paderborn and the University of Music Detmold (1991–1996) as well as Full Professor and Director of the Musicology Department of the University of Heidelberg (1996–2014), and from 2001 to 2007 also Vice Rector for Studies and Teaching. Her research focuses on music of the seventeenth and eighteenth centuries and opera.

Panja Mücke studied musicology, modern German literature and media studies in Marburg and received her doctorate in 2000 with the thesis Johann Adolf Hasse's Dresden Operas in the Context of Court Culture (awarded the Marburg University Prize). 2000-2010 she was a research assistant at the universities of Bayreuth, Bonn, Bremen and Marburg. Her habilitation was awarded in 2008 with the study Musical Film – Musical Theatre. Media Change and Scenic Collage with Kurt Weill. From 2010 to 2015 she held chair representations in Münster, Marburg and Bonn and a guest professorship at the University of Vienna. Since 2015 she has been professor of historical musicology at the Mannheim University of Music and Performing Arts, where she headed the Institute for Music Research from 2017 to 19. In 2019 she was elected Vice President for Research, Teaching and Studies in Mannheim.

Rüdiger Thomsen-Fürst studied Historical and Systematic Musicology and Modern German Literature in Hamburg. In 1994, he received his doctorate with a dissertation entitled Studien zur Musikgeschichte Rastatts im 18. Jahrhundert. Since 1996 he has been working as a research assistant in the research units History of the Mannheim Court Orchestra (1996–2006) and Southwest German Court Music (since 2006) of the Heidelberg Academy of Sciences and Humanities. Since 2009 he has been a regular lecturer at the Musicology Department of the University of Heidelberg.