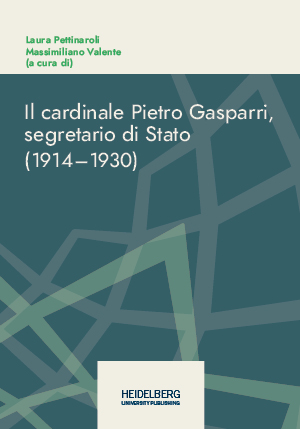 By the time of his death, Pietro Gasparri’s place in history was assured. Already during his lifetime, in fact, and in the period immediately following his death, one sees the development of a certain tendency among historians that has, in diverse ways, conditioned all subsequent interpretation of his person and actions. The fact that his crowning achievement, the Lateran Treaty and concordat, marked what the Fascist regime considered one of its own greatest triumphs, which it sought to exploit on both the national and international scene, coupled with the censorship in effect at the time, assured a particularly ideological – which is to say, a strongly apologetic – reading of this figure. The present study considers the manner in which the understanding of this relationship has been treated over the decades from the period following Gasparri’s death to the works published following the opening of the Vatican Archives relating to the pontificates of Benedict XV and Pius XI, for whom he served as secretary of State.
Furthermore, the nationalistic perspectives of the time, bolstered by the philo-fascist attitudes of the greater part of Italian Catholicism, meant Gasparri was largely associated with a specific context, namely Italy, and a single issue, the Lateran Pacts. However, over the subsequent decades, other facets of Gasparri’s work and the complexity of relations between the Holy See and Italy have gradually come to light. The aim of this study is to pull together an overview of the ways in which different historians, studying the Holy See’s relations with the Italian Fascist regime, have approached the person and actions of Pietro Gasparri and his emergence as a key figure in the successive pontificates of Benedict XV and Pius XI.