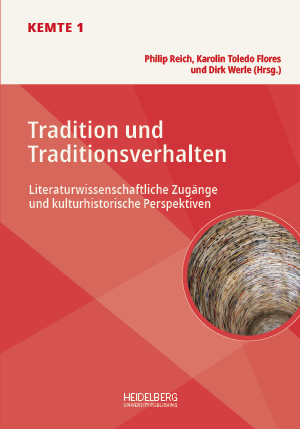 In Western cultural history, 'tradition' is one of the central concepts to describe processes of reception and their impact. Especially in literary studies, traditions are often claimed by stating, for example, that a particular text stands 'in the tradition' of another text. Nevertheless, coherent theoretical reflection is often lacking. This volume approaches the general question "What is tradition?" and the more specific question "How can one adequately speak about literary traditions?" by theorizing the premises of the concept and by discussing its theoretical capacity on the basis of case studies from various constellations throughout literary and cultural history.

Philip Reich is postdoc in the DFG-Research Unit „Philology of Adventure“ and Research Associate (Wissenschaftlicher Mitarbeiter) in Medieval German Studies, University of Munich (LMU). His main research interests include the literature of the Middle Ages and its transformations in the early modern period, interrelationship between Latin and German literature, codicology and paleography, space and literary theory, theory of the adventure. He is the author of the book Der Fahrende Schüler als prekärer Typus. Zur Genese literarischer Tradition zwischen Mittelalter und Neuzeit.

Karolin Toledo Flores is DAAD Lecturer at Adam Mickiewicz University Poznań (Poland), and was scholarship holder of the LGF Graduate Program "Was ist Tradition?" Her main research interests are processes of literary tradition, Viennese Modernism, and German-language literature of the 20th century from the Prague environment.

Dirk Werle is professor of German literature with a focus on the early modern period at Heidelberg University. His main research interests include the European literary history in the context of intellectual history from the 16th century on, the theory and methodology of literary studies, the history of scholarship, and the history of literary genres in the early modern period (lyric poetry, fictional narrative, epic poems). He is the author of Copia librorum. Problemgeschichte imaginierter Bibliotheken 1580–1630 (2007), Ruhm und Moderne. Eine Ideengeschichte (1750–1930) (2014), ‚Barocke‘ Lyrik lesen (2019), and Erzählen vom Dreißigjährigen Krieg (2020).