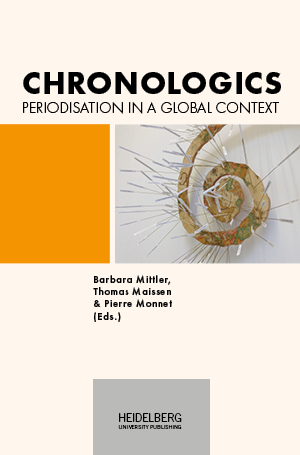 Titelei
Inhaltsverzeichnis
Introduction
Section I - CHRONOTYPOLOGIES
Chronotypologies
1. Making periodisation possible
2. ‘Islamic Civilisation’ as a (Medieval) Problem
3. Temporalities, Historical Writing and the Meaning of Revolution
4. Periodisation as Dialectic in a Peasant Discourse from Late Colonial India
5. The Pitfalls of Terminology
6. Historical Timeframes for Stateless Nations
Section II - CHRONOLOGICS
Chronologics
7. The Time of World History
8. Time and Its Others
9. Transnational Modernism and the Problem of Eurochronology
10. The Mythical Medieval
11. Reframing Time to Save the Nation
12. Nationhood and Imposing Power over Historical Time and Chronology
13. Conclusion. Region, Nation, World
Total

Chronologics: Periodisation in a Global Context

Many contemporary periodisation schemes have their roots in Europe, reflecting particular national religious or historiographical traditions and teleologies. As part of the colonial encounter they have been translated into new temporal authenticities in the Americas, Asia and Africa. Culturally determined as they are, these periodisation schemes are begging for systematic comparison in order to identify their contextual specificity and contingency. An interdisciplinary and transregional approach allows to work out categories of historical analysis that go beyond nation-bound interpretative patterns. In considering case studies from different parts of the world, the aim of this volume is to uncover some of the dynamics behind particular uses of periodisation schemes, as concepts for ordering the past.

Barbara Mittler came to Heidelberg as Professor of Sinology in 2004. She is co-founder of the Centre for Asian Studies and Transcultural Studies (CATS), which emerged from the Cluster of Excellence "Asia and Europe in a Global Context." Her research is in the field of China's cultural history.

Thomas Maissen came to Heidelberg as Professor of Modern History in 2004. He has served as Director of the German Historical Institute in Paris since 2013. His research focuses on the history of historiography, the history of political thought, the history of mentalities and Swiss history

Pierre Monnet has been Directeur d'études at the École des Hautes Études en Sciences Sociales in Paris since 2005 and has headed the « Institut Franco-Allemand de Sciences Historiques et Sociales » at the Goethe University in Frankfurt between 2011 and 2022. His research focuses on the history of late medieval cities and political systems in European comparison.