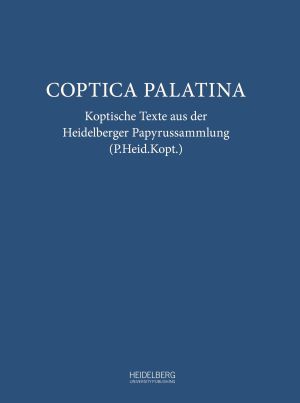 The texts compiled in "Coptica Palatina" were worked on by young scholars taking part in an International Summer School for Coptic Papyrology under the supervision of the editors. The volume offers editions of Coptic literary and magical texts, of private letters, as well as of legal and administrative documents, all complete with a commentary and a modern translation. These texts originate from different regions of Middle and Upper Egypt (Fayyum, Hermupolis, Bawit, Aphrodito, Esna, Apollonopolis magna) and are datable to the 6th/7th up to the 11th/12th centuries CE. The bulk of the material, however, comes from the 7th/8th century, the crucial period of Egypt’s transition from a province of the Byzantine empire to a province of the early Islamic caliphate

Anne Boud’hors is Directrice de recherche at the CNRS, Institut de recherche et d’histoire des textes. She specializes in the study of the Coptic language, Coptic manuscripts, and texts from monastic milieus.

Alain Delattre is Professor at the Université libre de Bruxelles (ULB) and Directeur de recherches at the École pratique des hautes études (EPHE, Paris). He works on Greek and Coptic papyri and inscriptions from late antique and early Islamic Egypt.

Gesa Schenke is a Coptologist based at Oxford University working on literary and documentary papyri. She focuses on early Coptic texts illustrating the beginning of Christianity with its cult of martyrs and saints at healing shrines and monasteries.

Tonio Sebastian Richter holds the chair for Coptology at the Free University of Berlin. He works on issues in the legal, economic, and social history of 1st millennium CE Egypt and on the diachronic change of the Eyptian-Coptic lexicon.