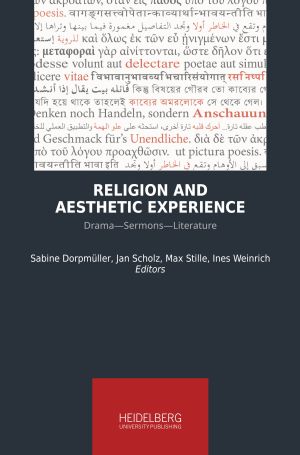 Title
Table of Contents
Acknowledgements
Introduction
Part I: Trajectories of Religious and Aesthetic Interpretations
Religious Experience as Aesthetic Experience
Classical Indian Aesthetics and rasa Theory: Observations on Embodied Rhetoric, Reader Response, and the Entanglement of Aesthetics and Religion in Hindu India
“Bride of the Qurʾān”: An Aesthetic Reading of Sūrat ar-Raḥmān
Part II: Aesthetics of Islamic Sermons
A Sermon on Piety by Imam ʿAlī ibn Abī Ṭālib: How the Rhythm of the Classical Arabic Oration Tacitly Persuaded
Between the Numinous and the Melodramatic: Poetics of Heightened Feelings in Bengali Islamic Sermons
Dramatic Islamic Preaching: A Close Reading of ʿAmr Khālid
Part III: Experiencing Religion in and through Literature
Popular Sufi Narratives and the Parameters of the Bengali Imaginaire
Religion into Literature: A close reading of ʿAbd al-Ḥakīm Qāsim’s novel Ayyām al-insān as-sabʿa (The Seven Days of Man)
Rhetoric, Hybridity, and Performance in Medieval Arabic-Islamic Devotional Poetry: Al-Kāfiya al-Badīʿiyya of Ṣafī ad-Dīn al-Ḥillī
Strategies in Islamic Religious Oral Performance: The Creation of Audience Response
Total

Religious aesthetics have gained increasing importance over the past few years in the fields of Religious studies and Islamic studies. This volume highlights the transcultural dimensions of the theoretical foundations of religious aesthetics. It explores aesthetic experience in the religious field through a series of case studies. These include Islamic sermons from the Middle East and South Asia, Islamic religious chanting, a chapter of the Qurʾān, a German performance artist, Indian rasa theory, and Arabic and Bengali literature. Together, the authors demonstrate that the analysis of the aesthetic forms of religious mediation across regions and genres is a fruitful approach to transcultural studies.

Sabine Dorpmüller is German Managing Director of the Arab-German Young Academy of Sciences and Humanities (AGYA) at the Berlin-Brandenburg Academy of Sciences and Humanities. A trained Arabist (PhD Münster University), she lived from 2005 to 2013 in Cairo, Egypt, where she worked at the Netherlands-Flemish Institute (NVIC) and the Cairo Office of the German Orient-Institut Beirut (OIB).

Jan Scholz participated in a research project on Islamic sermons at the Cluster of Excellence “Asia and Europe in a Global Context” at Heidelberg University. There, he defended his doctoral thesis on Islamic preaching in contemporary Egypt, for which he conducted fieldwork in Egypt between 2011 and 2015. In 2012–2013, he worked for the German Orient-Institut Beirut (OIB). At present, he is working at the Thuringian Ministry of Internal Affairs focusing on Islamist extremism, radicalisation, and internal security.

Max Stille was part of a research project on the transcultural dynamics of Islamic sermons at the Cluster of Excellence “Asia and Europe in a Global Context” at Heidelberg University, where he in 2017 defended his doctoral thesis on Islamic sermons in contemporary Bangladesh. Currently, he is researcher with the Center for the History of Emotions at the Max Planck Institute for Human Development in Berlin with a project on Urdu journalism. He is interested in the linkages between religion, communication and mobilization, particularly among Muslims in South Asia.

Ines Weinrich holds a PhD in Arabic Studies and is a researcher at Münster University, where she is conducting a research project on the performative elements in texts centring on the birth of the prophet Muhammad (mawlid). From 2008 to 2013, she was a research associate in Lebanon at the German Orient-Institut Beirut (OIB). Her research focuses on Arab performative cultures (poetry, music, theatre), and the sonic dimensions of Islamic ritual.