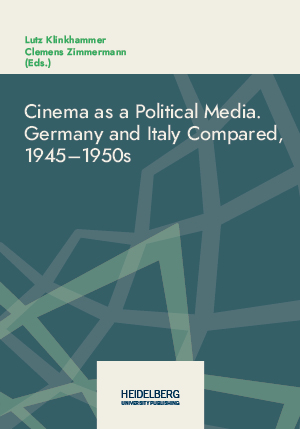 Bodies of Evidence, Burdens of Proof. Reason before the Court of Cinema after the Third Reich

Images of Jews in relation to morality and the conditions of law and justice have been present from the earliest productions in German Cinema. The themes of alterity and the tensions these posed for Jews and Gentiles underwent a radical shift in perspective in German cinema by the time of the Third Reich. At the end of the war, German cinema had been debased by the racial politics of the medium under the Nazis and faced an uncertain future among the physical and spiritual ruins of total defeat. The early postwar Cinema in the former Greater German Reich was placed under Allied control and films required a licence for production and distribution. Just what this entailed and how it was implemented is, however, not the subject of this paper. Rather,  I intend to look at how narratives about Jewish figures featured images and tropes of legal discourse and the courtroom space as a means to addressing the Nazi past and specifically the genocidal policies perpetrated against the Jews of Europe. To this end, I shall examine Artur Brauner’s “Morituri” and Georg Wilhelm Pabst’s “Der Prozeß”, and to a much lesser extent Erich Engel’s DEFA production “Affaire Blum”. These three films, all made in 1948, are in many ways exceptions to the cinema culture of the time precisely because they directly addressed Anti-Semitism and the law in German Society, a subject which found little popular interest, much less cinematic expression at the time.3 While “Affaire Blum” was made under Soviet licence by DEFA at what was left of the old UFA studios in Babelsberg, The other two films were produced under Western allied licence in Occupied Austria and Germany, nations that had until 1945 been considered a single entity as ‘Greater Germany’. These two Western sector films will form the greater part of my analysis as they present interesting counterpoints to the cinema discourse with the Nazi past away from DEFA’s increasingly Stalinist diktats. I hope to show how these films, both offered visual rejoinders to images of the Shoah and aimed to play a part in the narratives of recovery of German Cinema as a morally legitimate medium. I shall look specifically at the themes of rationality and justice and how, through the conduits of Jewish characters and their antagonists, these concepts were played out within Enlightenment values of the primacy of reason as a universal truth, beyond the vicissitudes, and thereby also the responsibilities, of accounting for history and ideology of the recent past. It is especially revealing to trace just how prevalent a return to an ‘ahistorical’ idealism in Kantian models of legitimacy, both in moral and epistemological terms, served to reconstruct restorative national narratives after the collapse of Nazism in film.
Before my analysis of this move, it is necessary to place these films of 1948 into historical cinematic context. The purpose of this is to frame the Cinema space itself as a courtroom. In so doing, an examination of the radically divergent presentations of Jewish figures, Cinema and legal space in both the Anti-Semitic Cinema of Goebbels’s Reichsfilmkammer and the documentary films shown at the War Crimes trial in Nuremberg by the Allied prosecution offer a key to the significance of the dramatic appearance of the ‘court space’ within the post-war films under discussion here.