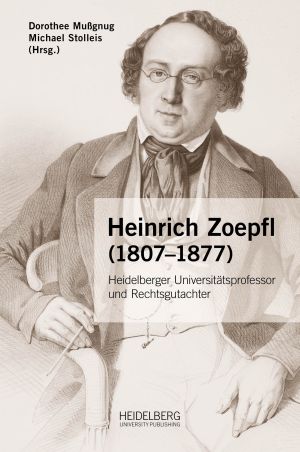 Heinrich Zoepfl (1807-1877), Heidelberg Professor of Legal History and Constitutional Law, was active in the turbulent times of the "Vormärz", the "German Revolution" of Gutachten and the foundation of the German Reich in 1870/71. He took an active part in all events, both in the lecture hall and through his writings, in the First Baden Chamber and in the Erfurt Union Parliament, as well as through  widespread activity as an expert. As such, he advised the government in Karlsruhe, those affected by political repression, cities, parliaments and individuals, but especially numerous "mediatized" aristocratic houses, which not only had to cope with their loss of political power, but also had to solve many internal legal issues. Zoepfl was always involved as an expert on aristocratic professional law.

For the first time, this volume presents a list of Zoepfls' unprinted and printed expert reports, commission reports, and works that can be found in Heidelberg University Library. Biographical details and an appreciation of his textbooks are followed by critiques of selected expert opinions, and historical outlines of the political situation in Zoepfl's lifetime.